Photo courtesy of the Ministry for Culture and Heritage.

In October 2016 Structural Concepts Limited, a Napier based structural engineering firm, were engaged to undertake a detailed seismic assessment (DSA) of the National Tobacco Company building.

Structural Concepts found the building had been designed in a robust manner, with good structural redundancy, on solid foundations and floors. They determined the strength of the building to be 15% of the New Building Standard (NBS), making it earthquake-prone.

The low NBS rating was due to weakness of the parapet above the art deco main pedestrian entrance. Strengthening the parapet was expected to bring the building’s NBS up to 67%NBS.

When the building owners were told the parapet was earthquake-prone, they decided to close the art deco foyer to the public until strengthening works were completed.

A local icon and tourist attraction

The building was designed by Louis Hay, a well-known and highly regarded Napier architect. Hay also designed the art deco entrance, which was built after the original structure was damaged in the 1931 Hawke’s Bay earthquake. The imposing entrance has become a major tourist attraction, and a popular stop for Napier’s art deco tours.

The building’s heritage value is recognised in its listing as a Category 1 historic place on the New Zealand Heritage List.

Find out more about the building’s history - NZ History website

Adapting the building’s use Tying the brick parapet to the roof. Photo courtesy of Napier BSL No1 Limited.
The building had been underutilised for some time so seismic strengthening work was completed along with a major refurbishment and alterations to the internal layout to accommodate new tenants. A new brewery and an urban winery feature in the tenant mix. Both have been drawn to the sensitive upgrade of the building’s significant architectural features.

In recognition of the heritage value of the building, the project was awarded a $10,000 grant from Heritage EQUIP. The grant contributed towards the costs of tying back the brick parapet to the roof.

With a tenant secured and strengthening work completed, the National Tobacco Company building will continue to play an important part in Napier’s economy. 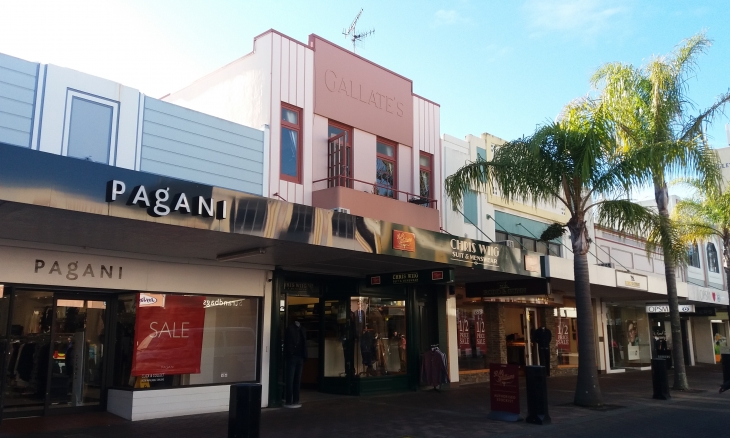